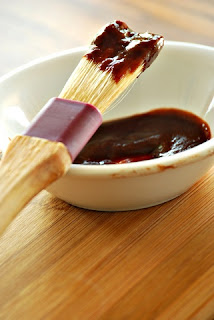 In honor of the record highs for this time of year, we had an Urban BBQ yesterday. (You know, when you pretend you have outdoor space inside a city apartment.) Just after one p.m., a heavily marbled brisket ($7 a pound from Grazin’ Angus) began bathing in the following:

Marinade and BBQ sauce
Process the first two ingredients and then mix with the rest.

After its long bath (about 2hrs) in a room temp Dutch Oven, the 3lb brisquet (and, on a whim, one very bruised apple, cored and quartered) went into an oven set at 225. (Low temp is key to an urban BBQ; it keeps the apartment from overheating!)

It braised for 3-4 hours and then was removed from the pot ‘to rest’.

The marinade was then sent boiling, uncovered, for about 20 minutes until it became a syrupy bbq sauce – some of which was mixed with some beans to make a quick side dish.

I browned the meat in a bit of peanut oil right before slicing and serving. (I know, I know; this is not the conventional way to do it. But it works for brisket.)
Posted by HungryNibbler at 10:11 AM