Leave Our Friend, the Steak, Alone 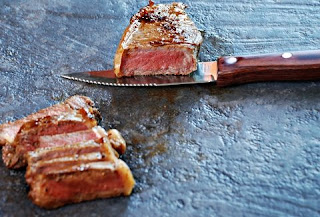 The NYT is giving beef the shaft again, with an article entitled The Price of Eating Red Meat.

It covers a large study that suggests eating red meat AND processed meat (the categories are lumped together) is associated with greater risk of early death, especially caused by heart disease and cancer.

What kills me about this article (and others like it) is not just the quick lumping of processed meats under "Red Meat" (as if Spam and filet mignon are nutritionally equal), but the following, quietly hidden in the middle of the article, rendering the rest of the article moot:

"The subjects in the study who ate the most red meat had other less-than-healthful habits. They were more likely to smoke, weigh more for their height, and consume more calories and more total fat and saturated fat. They also ate less fruits, vegetables and fiber; took fewer vitamin supplements; and were less physically active."

If Jane Brody, and presumably the Health section editor, understands that "Other factors associated with meat-eating are the real culprits in raising death rates, " why the misleading headline?

I am going to defrost a sirloin for veg-heavy stir fry in protest.


picture by H.D. Connelly
Posted by HungryNibbler at 9:26 AM