Cooking, the Way to Man’s… Brain? 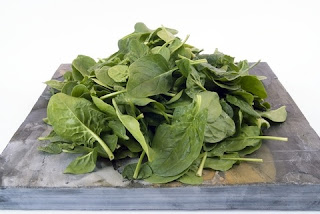 The theory that primordial Iron Chefs led to the evolution of humanity proved itself in a pan on my stove earlier this week. The theory, the metabolic basis of which is covered here (by me), is getting increased traction from a different angle, due to a new book by primatologist Richard Wrangham, Catching Fire: How Cooking Made Us Human.

The book, covered by the NYT on Tuesday, will be released in May. (Who wants to keep me company on the waiting list?) It claims that our big brains got big when we started processing more of our food outside our bodies – freeing up calories (and likely releasing other nutrients) to feed the brain.

In other words, apes have to chew a handful of weeds for over an hour. They spend practically the whole day masticating. We just get out a pan.

A couple days ago, my pan was piping hot and held the usual array of caramelized onions, garlic, etc. On the counter was the biggest bowl in the apartment – the bottom portion of the salad spinner – filled to the brim with fresh spinach. Enough spinach to make salad for eight to ten people. I combined the spinach and the pan trimmings. Suddenly I had a tiny pile of leaves.

By applying a wee bit of heat, I now had the capacity to eat 8 to 10 salads, in one sitting!

I applauded my nutritional wizardry. And then remembered cooking has been around for at least 150,000 years. (Wrangham puts it at 1.8 million years, albeit controversially.)

So in a meaningless attempt to do my ancestry one better, I turned the leaves into the below for dinner; it would be nice for brunch, too. It is a riff on an ‘ouefs piperade’ recipe from James Briscione.

Preheat over to 425 degrees.

Coat, or spray, large non-stick skillet with oil. Heat over medium-low heat. Add pancetta. Allow fat to render but avoid browning the meat. Add onion and garlic. Sauté until onions are soft and beginning to caramelize. (It helps to cover intermittently.) Mix in spices. Then the mushrooms. Cover and let mushrooms release their liquid, stirring occasionally. When mushrooms have softened, turn off heat. Mix in vinegar and fold in fresh spinach. The spinach should wilt but not become mushy. Briefly turn heat back on if necessary.

Crack eggs over mixture, leaving yolks whole. Sprinkle with feta and black pepper. Place in oven for 15 minutes or until yolks are desired firmness. Slice and sprinkle with additional feta, if desired. Serve with a fresh baguette or home fries.