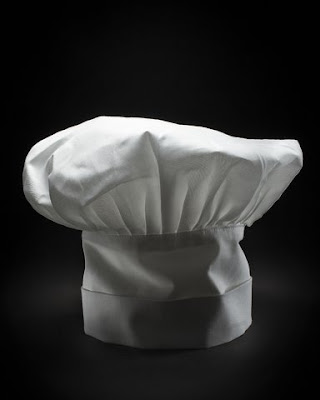 All week I have been watching meals be made by amateurs, who were trying to copy the movements of a food pro. (Think kindergarteners imitating a prima ballerina.)

However, during the intensive class at the Institute for Culinary Education, I think I ended up learning more from my fellow students than I did from the teacher. Not that Chef Anita Jacobson, who has more than 20 years of professional experience, was not a wonderful teacher. On the contrary, she was knowledgeable, empathetic and kind. It’s that she, alone, was familiar; I have watched her type on more food shows than I care to admit.

But seeing her amidst roughly fifteen amateurs put her talent in stark relief.

A true chef, I realized, has no fear of food. She or he handles ingredients roughly, shaking and telling them what is expected in no uncertain terms. While us students timidly poked the lamb loin and gingerly stroked a stalk of fresh sage, Jacobson grabbed, flipped, twirled, bunched and butchered – sometimes without even looking.

Sure, that is partly the result of practice. But it is also due to an advanced, sought after, and empathetic relationship with food. She understood, say, the chemistry of kale and how it differed from spinach, if not in scientific terms, on an intuitive level – the same way you and I know what to expect from a good friend.

(That said, she trusted ingredients much more than many of the school’s ovens.)

While she was grabbing a potato and bluntly asking how it was feeling today – and realizing it was sick from some invisible tinge of color – we students were shyly trying to get up the nerve to ask the oregano if we could sit next to it. (What if we don’t get along??)

I think that even if I was to bring Chef Jacobson some exotic vegetable or fruit she had never seen, she would handle it the same way. She may spend more time actually looking at a durian but I am sure she would gruffly grab even its thorny shell, intimately sniff its pungency and ultimately hack it open in one swift chop. Much different than the timid, finger-torn sawing I did the first time I opened one myself. (Ruining all sense of ventilation for my poor roommates.)

Come to think of it, most of the farmers and farmer helpers in the market are very casual with their products, too. They don’t attempt to hide blemishes, loving each as is. Nothing is handled squeamishly or hierarchically; pig ears and turkey necks are passed with the same hearty respect as an oversized butternut squash. And nothing is delicate; even the baby greens are deftly harvested from their potted soil as we hungry consumers watch.

Perhaps that is why I feel irrationally flattered when I get to go home with the most beautiful stalk of oyster mushrooms or the most evergreen bag of pea sprouts. Each piece of food is the farmer’s close friend. And they are, of course, happy to introduce us.

Photo by Dyscoh via Dreamstime
Posted by HungryNibbler at 5:56 PM