Green Purses: When Veggies get Rich 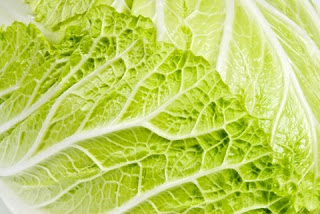 A few days ago, I found myself with a need to kill time and hunger pangs in the dimly-lit outer section of the Istanbul airport. A scheduling issue had forced me from the rather benign, if too bright, international zone; I was banned from all things duty-free and restaurant-y until 11 pm. The clock, impaled in the middle of a walk way, stubbornly kept insisting it was just after four. I paced. And then, following a sign for Burger King, happened upon a circle of food stands.

Each stall, whether it was offering Chinese, Italian or Turkish had its red dish (ravioli, Manchurian chicken, sambal-sauced meat), its grey dish (old pesto, sautéed veal, lamb kekabs) and tan-green sandwiches. (Yes, it is a color; I saw it there, with my own eyes.) I circled. Circled again.

Still baffled by my options (floured-this and dough-stuffed-or-topped-that), I went around a third time, now in the familiar hunch of forlorn stomachs everywhere. A man approached (a Messiah? A flirt?) with "You are a celiac, aren’t you?"

Within minutes he was scooping me dolma, stuffed vegetables, in this case, green bell peppers. Yes, they too were grey, but they were also oozing with olive oil and I was reminded, once again, of my fondness for rich savory mixtures wrapped in tangy accommodating vegetables. (Stuffed grape leaves are among my very favorites, but you gotta take what you can get.)

Even their name, to my mouth, seems to recreate the experience of eating a stuffed vegetable; the "d’s" slightly firm but never crisp beginning, releases into the unctuous chew "ol", and then a closing bite against succulent veggie skin: "ma!"

Last week, a craving for stuffed cabbage hit me when I only had napa in the house. It turned out to be a blessing (I add oh, so, modestly), even if it was slightly harder to work with small leaves. Napa is sweet, so go savory on the beef seasoning – and avoid any temptation to add tomato. (Really, some will disagree, but the acid will drown all the other flavors out.) The Napa’s contrast with the earthiness of the portabellos caused my fork to bounce between the two like a ball at a tennis match.

The cabbage came from D and J organics at the Monday market in Union Square. The portabellas were from Madura Farm on Pine Island, which sells mushrooms and lots of other produce in Union Square, but really only mushrooms (Shiitake, Maitake, Portobello, Crimini, Oyster…) at Prospect Park on Saturdays. According to the Valley Table, Madura plans to start offering morels and heirloom apples in the near future. My mouth is watering already.

Place the leaves in boiling water, using tongs to protect the tops while the stems become slightly tender. (Keep in mind leaf will continue to cook once removed and cooling down.) Then submerge entire leaf for about 30 seconds. Remove and allow to cool on dry towels.

Place mushrooms, stems removed, in boiling water. Boil until slightly tender, about 3-4 minutes. This will turn the water a deep flavorful 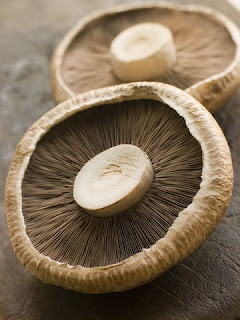 chestnut color – which I stashed into my freezer for a future, as yet un-conjured, dish. Cool and drain on towels, hollow side down.

Whisk egg in medium bowl. Add cool ground beef (I used leftovers from a previous meal). Add bread crumbs, 1/3 cup at a time and mix. (It is rather fun to mix this with your hands.) Stir in parsley.

Smooth oil over the bottom of a baking dish. Set oven to 350. Place spoonful of beef mixture in the middle of a leaf. Fold tender sides around and curl stem up. Secure with a tooth pick. Place in pan. Repeat for each leaf.

Pack meat mixture into the bottom of a portabella cap – working in small spoonfuls, until deeply and securely packed. Place in pan, meat side up.

Bake for about an hour. Serve with wild rice.
Posted by HungryNibbler at 1:49 PM