Egg Fortunes from the Fertile Crescent

As we ate lunch, I asked a colleague what foods are grown nearby. He became obviously offended, as if I had called his country Hicksville. I backpedaled, explaining that I understood Iraq has modernized and now gets imports from all over; I was simply curious what is possible to grow. “Nothing… except lamb,” he said, laughing over his lamb kebab.

This is, of course, untrue. Iraq was once considered the bread basket of the Middle East and even if agriculture has suffered in recent decades, in many areas, as much as 80% of the population are farmers. What do they grow other than meat? Wheat, barley, corn, dates, grapes, olives… This time of year, there are oranges hanging from trees even in cities and I see weeds peeping out of cracks in the street that might as well be salad. The Kurdish countryside is just getting green, although not as lush as it will be in a few weeks. Soon, it will hurry to decorate the hills and mountainsides in time for the spring holiday, Newroz. 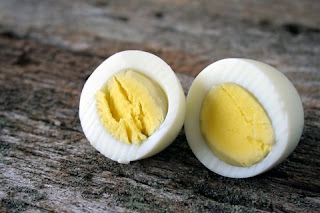 Judging on the change in scenery, I decide to try the eggs again. Chickens are raised primarily at city perimeters in Iraq, and my guess is, this time of year, they snatch up some of those luscious looking weeds I am tempted to sauté in garlic and olive oil.

During two previous trips to Iraq, last October and January, I ate more boiled eggs than I care to remember. (Reader, please note, this was out of hunger and lack of options, not desire.) What struck me about these eggs (and where I placed the blame for their inability to satiate) was the yolk. It was white – identical in hue to its surrounding. The yolk’s flavor had none of the sultry flavor I have come to expect. It was nothing but texture. A flavorless white crumble.

This morning, though, I unpeeled a small hard-boiled egg and bit through egg white into a tulip-yellow yolk, slightly coated in blue grey. (Most yolks have this coat when boiled; we just forget about it until Easter.) The flavor was so satisfying I was happy with one (although I’ll need to add another to tomorrow’s breakfast) and I am giving all credit to the weather. Spring has sprung here. The weather has all the fickle moodiness of late March/early April back home – and the prickly grass to match.

So based on my unscientific analysis, I would like to make a prediction: pastured eggs from NJ and NY are on the verge of getting very very good.

photo by Darren Fisher
Posted by HungryNibbler at 10:47 AM