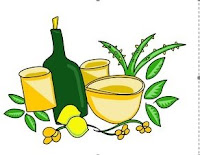 A reason for avoiding processed foods, when possible, that has nothing to do with cancer, campaigns or carbon footprints:

“The whole trend of American family cooking, since the 1940s, had been toward faster and easier, and things that were already prepared. It was gradually whittling away the very essence of what it meant to cook dinner for your family.

It’s like the story of the farmer who decided that his mule was eating too much and he gradually fed the mule less and less. And just when he’d trained the mule to live on nothing, the damn mule died on him. That’s kind of what’d happened to American family cooking.”

-David Goines -- known for his Art Nouveau posters (here is the first for Chez Panisse) and for being an early boyfriend, and later collaborator, of Alice Waters -- quoted in The United States of Arugula, by David Kamp.

Posted by HungryNibbler at 10:31 AM