Ease Cow Indigestion and Save the Planet 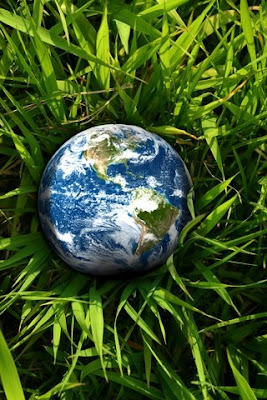 Apparently when cows eat closer to what they have evolved to eat (instead of cheap corn), they stop contributing as much to global warming.

I only have one question, and it is for the Ms. Julia Laurain, who is quoted in the article and is a representative of Valorex SAS, a French company that is making feed additives to make conventional feed closer to that which is evolutionarily appropriate. Why come up with a 'new' feed, complete with these 'newly discovered additives' when pasturing the animals will do the trick?

Excerpts from the highly recommended NYT article are below. (Now I am craving a grass-fed burger...)

Greening the Herds: A New Diet to Cap Gas
By LESLIE KAUFMAN

HIGHGATE, Vt. — Chewing her cud on a recent sunny morning, Libby, a 1,400-pound Holstein, paused to do her part in the battle against global warming, emitting a fragrant burp.

Libby, age 6, and the 74 other dairy cows on Guy Choiniere’s farm here are at the heart of an experiment to determine whether a change in diet will help them belch less methane, a potent heat-trapping gas that has been linked to climate change.

Since January, cows at 15 farms across Vermont have had their grain feed adjusted to include more plants like alfalfa and flaxseed — substances that, unlike corn or soy, mimic the spring grasses that the animals evolved long ago to eat.

As of the last reading in mid-May, the methane output of Mr. Choiniere’s herd had dropped 18 percent. Meanwhile, milk production has held its own.

Scientists working with Groupe Danone had been studying why their cows were healthier and produced more milk in the spring. The answer, the scientists determined, was that spring grasses are high in Omega-3 fatty acids, which may help the cow’s digestive tract operate smoothly.

Corn and soy, the feed that, thanks to postwar government aid, became dominant in the dairy industry, has a completely different type of fatty acid structure.

Ms. Laurain maintains that even if the [more suitable] feed costs more, it yields cost savings because the production of milk jumps about 10 percent and animals will be healthier, live longer and produce milk for more years.

The methane-reduction results have been far more significant in France than in the Vermont pilot — about 30 percent — because the feed is distributed there not just to organic farms, where the animals already eat grass for at least half the year, but also to big industrial farms.

“They are healthier,” [Mr. Choiniere] said of his cows. “Their coats are shinier, and the breath is sweet.”


picture by Monika Wisniewska
Posted by HungryNibbler at 12:39 PM