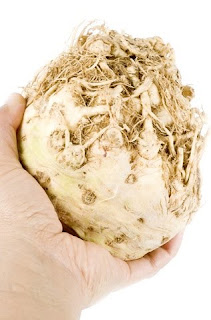 One of my favorite vegetables this time of year is celery root, also known as celeriac. Despite its name, this hearty veg is not the root of celery. It does anchor some stalks that are awfully celery-like in appearance, they don’t taste very good and I’d skip putting them in your bloody mary. Still, celery root is from the celery family and the same salty flavor base – so familiar in stocks, hors d’oevres trays and, of course, “ants on a log” – infuses this starchy tuber.

While it is rather homily in appearance, it can add a lot of pizzazz (without being garish about it) to dishes such as gratins, purees, stews – pretty much anything you would use potatoes for. In fact, that is how I think of celeriac: a celery-flavored potato.

The weather has made me obsessed with soup. It has been two-soup day every day this week, a feat which was greatly helped by a large pot of the below.

Serves 6 as an entree, 12 as an appetizer

NOTES: 1) don’t worry about knife skills as you prepare the ingredients; you are going to puree everything anyway. 2) An immersion blender makes this dish a breeze to make.

In a large stock pot, warm bacon grease over medium heat. Add shallots and leeks; lightly carmelize and take off the heat. Add the rest of the vegetables (minus the scallions) and the apples to the pot, along with 6 cups of broth. Cover pot and bring broth to a boil. Allow to boil until everything is very tender, about 40 minutes.

Puree, either with an immersion blender right in the pot, or transfer portions to your standing blender. Blend until soup is all one smooth consistency. Stir in cream and additional broth until soup is desired consistency. Season with salt and pepper to taste. Serve piping hot, topped with scallions if desired.

Posted by HungryNibbler at 12:03 PM