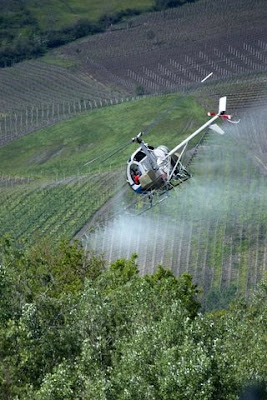 Several pesticides, used on soil and/or major crops, are potent neuro-toxins and have been linked with diseases such as Parkinson's for a long time. A study appearing in the July issue of Archives of Neurology has just linked the two with even greater specificity.

The press release notes that several pesticides known to cause major health problems are now being more tightly regulated. (So, what? people growing up in the forties, fifties and sixties were just unlucky?)

This is what I found as an example of such tighter regulations: In August of 2006, the EPA called for a voluntary cancellation of registrations for the pesticide/neuro-toxin lindane, saying there are now safer alternatives. It has taken us roughly sixty years to realize the problems with lindane; isn't too soon to be calling new alternatives safe?

And, unfortunately for the eaters of today and tomorrow, lindane and other pesticides are considered "persistent organic pollutants" meaning they will continue to accumuate up the food chain for a long time after they have stopped being used.

Posted by HungryNibbler at 1:22 PM