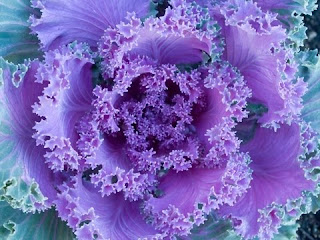 Unlike a hilarious game of telephone, the following recipe has been passed along unadulterated and retaining its original yumminess. I picked it up at the "information" stand at the Borough Hall farmers' market. Each greenmarket seems to have one of these, and they are usually stocked with great recipes for whatever you will find being sold around you. The greenmarket, in turn, took this particular recipe from The 100-Mile Diet: Local Eating for Global Change. I've copied the recipe verbatim, to pass it on its pure form. My notes are in italics.

I have a never satisfied hunger for kale, so that was my "late fall green" of choice. Although, "green" is a misnomer, as the kale I was using was purple -- which, when I went to drain the cooked leaves, temporarily turned the sink violet. Later, the cream in the dish became a soft lavender, lending a bit of whimsy to this veggie heavy dish. Other than the seasonings, every ingredient can be found from a local source. We ate it with roasted sweet potatoes, also available in the market right now.

Casserole of Late Fall Greens
serves 2 as an entree, 4 as a side dish

1/2 cup fresh bread crumbs (drop a couple crustless slices in the food processor, and crumb away)

2 cloves of garlic, smashed and peeled

2.5 ounces of bacon (about 3 strips) (whenever I buy bacon, I immediately repackage it into 3 strip allotments before freezing; this seems to be the perfect amount to add flavoring to greens, potatoes, egg dishes...)

1/3 cup of freshly grated hard cheese (cows milk or sheeps milk would be best) (I got grater-happy and ended up using 1/2 cup; less than that and the cheese's contribution may have been lost.)

To prepare and cook the greens, remove any tough stems and roughly chop. (To yield 2 cups cooked you will need 1 pound of spinach or brocolli raab, 1 3/4 pounds of swiss chard, or 1 1/4 pounds of kale.) Bring a pot of lightly salted water to a boil and cook until the greens are tender (spinach 30 seconds, swiss chard 1 minute, brocolli raab 2 minutes, and kale 8 minutes). Drain and squeeze to remove excess water.

Preheat the oven to 400 degrees. Butter a 4 cup shallow gratin dish. Toss together the breadcrumbs and 1 T of melted butter with a pinch of kosher salt and a little ground pepper and set aside.

In a medium saucepan, bring the cream and garlic to a boil over medium-high heat and then turn down the heat and simmer vigorously until the cream is reduced to about 3/4 cup. Take the pan off the heat and remove and discard the garlic cloves. Let the cream cool slightly and then season with 1/4 t of salt and a few grinds of black pepper.

In a large skillet, cook the bacon until crisped and browned. Drain on a paper towel and remove almost all of the excess fat from the pan. Add the remaining 1T of butter and return the pan to the heat. Add the cooked greens with 1/4 t salt and cook stirring constantly for 1 minute. Evenly spread the warmed greens in the gratin dish.

Crumble the bacon over the greens. Sprinkle on the cheese. Pour the seasoned cream over the greens/bacon/cheese and top with the bread crumbs. Bake in the 400 degree oven until brown and bubbly - about 25 minutes. Let it rest for 10 to 15 minutes before serving.

picture via Dreamstime
Posted by HungryNibbler at 8:54 AM