How to You Like Your Meat? Dumb or Healthy? 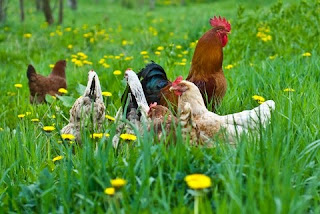 An op-ed in today's NYT has my blood boiling.

Adam Shriver, a doctoral student at Washington University, suggests the way to solve the problems at factory farms is to genetically engineer livestock not to feel pain. Then we can keep them sequestered in unhygienic conditions and continue feeding them grains which make them sick guilt free!

This is a typical case of fighting fire with fire. We are only now starting to see the problems with previous advancements in food production (which, by the way, were also supposedly going to be problem-free). And instead of going back to ways nature intended, i.e. allowing chickens and cattle to eat grass, we are adding more advancements by doping them with antibiotics and considering altering their genes.

Not sure what it says about me, but I am not an animal activist. Worse, I'll have to admit, I am a speciesist. While I agree that animals should not be needlessly harmed, it is the human dependence on animals for nutrition that moves me. (Vegans, most well-educated medical doctors will say you are not well fed.)

The problem with how we treat our livestock is not just the plight of the suffering animals. Humans are suffering from eating these maltreated animals. Not only has the build up of antibiotics in the food chain been linked to an array of human health problems, but the simple act of feeding animals cheap subsidized grains rather than grass, their natural food preference, has dangerously altered the balance of essential fatty acids in the average American body. (Too much Omega 6, too little Omega 3.)

As a result, Americans have increased inflammation throughout our bodies, raising our risk of heart disease, diabetes, cancer and other health problems. The imbalance is also affecting our brains; Omega 6 fatty acids can cross the blood-brain barrier and trigger depressive symptoms.

Making cows too dumb to notice the acidic burn of eating grains instead of grass will not solve any of these problems.

The student concludes with a preposterous theory that knock-out genetic engineering (where a gene is omitted instead of added in) can not cause health problems to eaters. This paragraph showcases a shocking disrespect for the complexity of the genome for a doctoral student.

To be clear, an omission can be just as dangerous as an addition. It can also be just as safe. But like the "innovation" of feeding animals grains instead of grass, it can take half a century to know the effects on humans.

(I am not against innovation, Mr. Shriver, but please don't declare something safe when the truth is we don't know; people have enough trouble trusting science as it is.)

We need creative thinkers to figure out how we can raise enough livestock in a healthy and humane way, not how we can add potential new problems to the mix in attempt to assuage our collective guilt.