Cabbage Buds from a Tree 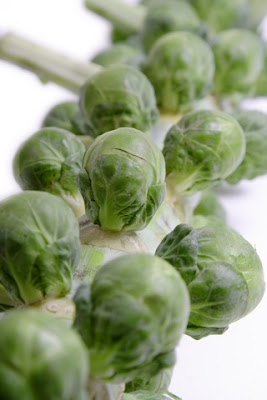 Rumored to come from Brussels, but bearing no resemblance to sprouts, Brussels sprouts are making their first appearances in the market -- although I had trouble locating them at first.

I was scanning the stands for heaps of perfect dollhouse-sized cabbages when my eye caught on a thick stalk almost 2 feet long. It was wrapped with Brussels sprouts like a sting of bulbous lights on a Christmas tree.

Despite eating hundreds of these creatures over the last few decades, I had rudely never considered the upbringing of this button-cute member of the cabbage family. Apparently, they bud in bunches of 20 to 40 on the thick stem of a plant that grows several feet tall. Here’s a picture of a harvested field, where mostly stalks remain.

While most everything in the cabbage family (including kale, broccoli and cauliflower) is going to get even tastier as the temperature dips, I see no reason to wait. Besides, is it possible to resist snatching up a stick ornamented with Brussels sprouts?

Below is my favorite way of preparing them, not only because it is so simple. Roasting them caramelizes and chars the outer leaves, giving their texture an added dimension.

Roasted Brussels Sprouts (with fig option, see below)
- serves 4 as a side dish

Preheat the oven to 400 degrees F.

Combine oil with salt and pepper. Add Brussels sprouts and toss. Spread on a large baking sheet and roast for 30-45 minutes until just tender enough to pierce with a knife. Serve while still hot.

For a festive rendition, 15 minutes before the sprouts are done, add 8-10 fresh dark-skinned figs that have been de-stemmed, quartered and lightly coated in oil. Garnish the duo with pomegranate seeds.

Posted by HungryNibbler at 4:40 PM