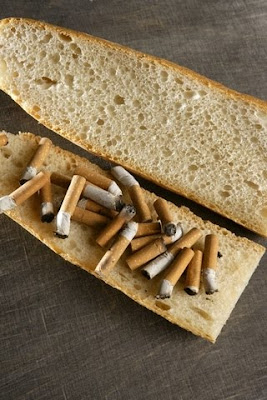 Michael Pollan's has an excellent Op-Ed in today's NYT about the health care system, explaining that the "Western diet" is the elephant in the room when it comes to this debate. "According to the Centers for Disease Control and Prevention, three-quarters of health care spending now goes to treat 'preventable chronic diseases,'" he writes, many of which are caused by poor diet.

Requiring the health care system to cover everyone, regardless of pre-existing conditions, etc., he argues would give Big Insurance the incentive to fight Big Food. Here's an excerpt:

"[If the proposed heath care reforms actually go through], what happens when the health insurance industry realizes that our system of farm subsidies makes junk food cheap, and fresh produce dear, and thus contributes to obesity and Type 2 diabetes? It will promptly get involved in the fight over the farm bill — which is to say, the industry will begin buying seats on those agriculture committees and demanding that the next bill be written with the interests of the public health more firmly in mind.

In the same way much of the health insurance industry threw its weight behind the campaign against smoking, we can expect it to support, and perhaps even help pay for, public education efforts like New York City’s bold new ad campaign [worth checking out] against drinking soda... School lunch reform would become its cause, too, and in time the industry would come to see that the development of regional food systems, which make fresh produce more available and reduce dependence on heavily processed food from far away, could help prevent chronic disease and reduce their costs.

Recently a team of designers from M.I.T. and Columbia was asked by the foundation of the insurer UnitedHealthcare to develop an innovative systems approach to tackling childhood obesity in America. Their conclusion surprised the designers as much as their sponsor: they determined that promoting the concept of a “foodshed” — a diversified, regional food economy — could be the key to improving the American diet."

A diversified, regional food economy? Sounds like a network of farmers' markets to me.

After researching the addictive nature of much processed food, David Kessler, former commissioner of the FDA, also came to the conclusion that Big Food should be treated in the same way as Big Tobacco. In his recent book The End of Overeating, his arguments for taxing soda, banning ads aimed at children, etc. parallel those against cigarettes. While easily obtained, both cigarettes and junk food are emotionally and physically addicting, slowly but surely damage the brain and body and are crippling our health care system. Neither should be socially acceptable.

Smoking has gone out of style. Are cola and Cheetos next?

picture by Lunamarina, via Dreamstime

Posted by HungryNibbler at 11:19 AM