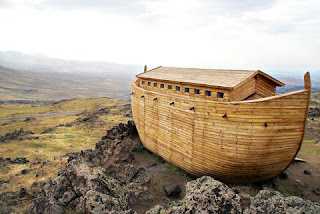 A frozen Noah's ark is being created on a 45-acre estate in Newport, RI.

While organizations such as Slow Food USA and the American Livestock Breeds Conservancy are helping to keep rare breeds alive by, well, keeping them alive, Swiss Village Farm Foundation (SVF) is conserving heritage livestock breeds by freezing their semen and embryos. They expect cryopreservation to significantly aid the conservation movement which, considering the decline in our food diversity, brings to mind two sayings: "too little, too late" and "something is better than nothing."

This is not just a matter of preserving gawk-worthy zoo novelties; it is about shoring up the health of our own species. While a diverse diet and disease resistance have long been known to go hand in hand, our modern diets -- despite the fake plethora in the cereal aisle -- are strikingly homogeneous. According to ecologist Vadana Shiva, humans used to eat over 80,000 different species but today three-quarters of all human food intake comes from just eight plants, mostly genetically-modified corn and soy. Half of the genes in 93% of our dairy cows comes from less than 20 bulls.

The agriculture industry runs on consistency, while our bodies run on variety.

As I have mentioned before, when I compare the menu of the ancients with the menu of modernity, I can’t help but become green with envy. Exacerbating the problem, we are losing varieties within species every year.

Some excerpts from the NYT article about SVF by Barry Eastabrook:

"As an example of how vulnerable our milk supply is, Dr. Saperstein [SVF's chief scientific adviser and chairman of the Department of Environmental and Population Health at the Cummings School of Veterinary Medicine at Tufts University] points to a heat wave in California in 2006 in which some 16,500 Holsteins died, despite farmers’ efforts to save them with cooling mists of water and fans. In contrast, the Pineywoods cattle in SVF’s collection were introduced into the forests of the South by Spaniards in the 1500s specifically because they tolerated heat. In all likelihood, the hearty animals would have survived the heat wave.

“'Heritage breeds have not been continuously ‘improved’ by humans,' Mr. Borden [the executive director of SVF] said. 'They have been shaped by natural survival-of-the-fittest forces and can get along without human intervention. Typically, rare varieties exhibit good birthing and mothering abilities. They can thrive on native grasses and other natural forage, and many know how to avoid predators.'”

In the end, the article stresses,

“'We have to eat these animals to save them,' Mr. Borden said. “Ultimately, food is the reason heritage breeds are important.'”

Posted by HungryNibbler at 8:52 AM